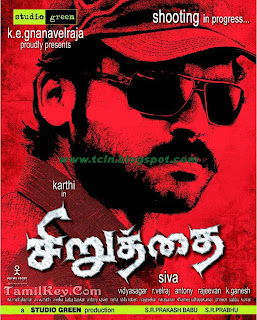 The most happening hero Karthi is playing a lead role in ‘Siruthai’ a remake of Telugu hit "Vikramarkudu". And Karthi would be seen playing a dual role in Siruthai for the first time. The film has Karthik sivakumar enacting dual roles as a tough IPS officer and other one as a petty thief , the total contrast. to read the rest of this story please go here to know more about karthi's new film Siruthai,
After the success ride with his latest release 'Naan Mahaan Alla',karhti is all planning to have its next film 'Siruthai'
Posted by Unknown at 2:23 AM 1 comment: 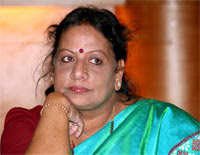 Vaishali Kasaravalli, who is the wife of the prominent director Kasaravalli was passed away.
Girish Kasaravalli was born in Kesalur, a village in the Tirthahalli taluk in Shimoga district in 1950 to Ganesh Rao and Lakshmi Devi. He had his primary education in Kesalur and middle school education in Kammaradi. Hailing from a family of book lovers, he was initiated to reading good books from a young age by his father. His father was also a patron of Yakshagana, a folk system of dance, native to Karnataka
Girish Kasaravalli (born 1950) is a noted film director, and one of the pioneers of the Parallel Cinema in Kannada cinema, Girish Kasaravalli won National Film Award for Best Film four times, Ghatashraddha (1977), Tabarana Kathe (1986), Thaayi Saheba (1997) and Dweepa (2001)
To know more about Girish Kasaravalli go there.
Vaishali Kasaravalli, wife of great Kannada film director Girish Kasaravalli and mother of Ananya breathed her last today at the age of59 at a private hospital in Bangalore.
Vaishali Kasarvalli has directed the famous kananda serial Moodala Mane.
Posted by Unknown at 5:55 AM 1 comment:

Surya & Karthi at Singapore | Actor Surya and Karthi Together |

here is the brothers of kollywood, "Actor Surya" and "Actor karthi" with one of their fans at singapore airport.
If you have any photos of surya and/or karthi just send it to me. immediatly it will be posted here in photos of surya or photos of karthi section
Here is the Child-Hood photos of Surya and Karthi
Posted by Unknown at 4:58 AM No comments:

Last and final episode of Karthik Sivakumar, program in vijay tv, and finally a lot of news about naan mahaan alla.
Naan mahaan alla , karthi and Director Speaks a lot on this Episode, naan mahaan alla is the next film of actor Karthi
Posted by Unknown at 2:37 AM No comments:

Second Episode of the Kanavu Naayagan Kaarthi in Vijay TV, in this Episode Karthi Speaks about Kamal and also about brother Surya Sivakumaar,
Actor Karthik, Speaks about his Father Actor Sivakumar
Posted by Unknown at 2:30 AM No comments: